The advent of modern technology meant that certain inventions had to be put on the wayside. While some technologies, like early cell phones, have almost disappeared, some have become less common, like transistor radios. Consumer radio technology still exists, transistors and component systems are still in the market, but it’s become less relevant over time, as the Internet becomes more and more ubiquitous. You would think that entertainment radio would eventually die off — but technology can innovate, too! Check out GTI Radio! This Windows gadget acts as a portal to the GTI Radio Internet station, giving you the same radio experience, but through the Internet! The future is now — download GTI Radio today! 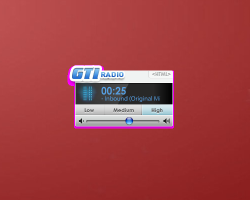